I decided to post this one for my father-in-law, who is an avid hot sauce and salsa connoisseur, Moonius. I spent a few weeks working on a Habañero pepper salsa and I feel this is the best one. It starts a bit slow in the heat then it hits you hard. What is really nice about this salsa, is that it doesn't linger too long on your tongue and the taste brings you back for more torture.

Directions
Take the Habañeros, Bell peppers, Tomatoes, Green onions and Apple Cider Vinegar and place them in a pot with water to cover the ingredients. Add a little salt to the water and bring to a boil and let boil for 10 minutes.
Strain and discard all liquid. Place ingredients into a steep sided container and add the Cilantro, Olive Oil and Agave Nectar. Use an Immersion Blender to blend the ingredients into a chunky or smooth salsa, based on preference. Add Salt and Pepper to taste.

If you do not have an Immersion Blender, a Food Processor will work just as well. Grab a bag of blue corn tortilla chips and enjoy a warm salsa or let the salsa chill and enjoy a cold and burning treat! 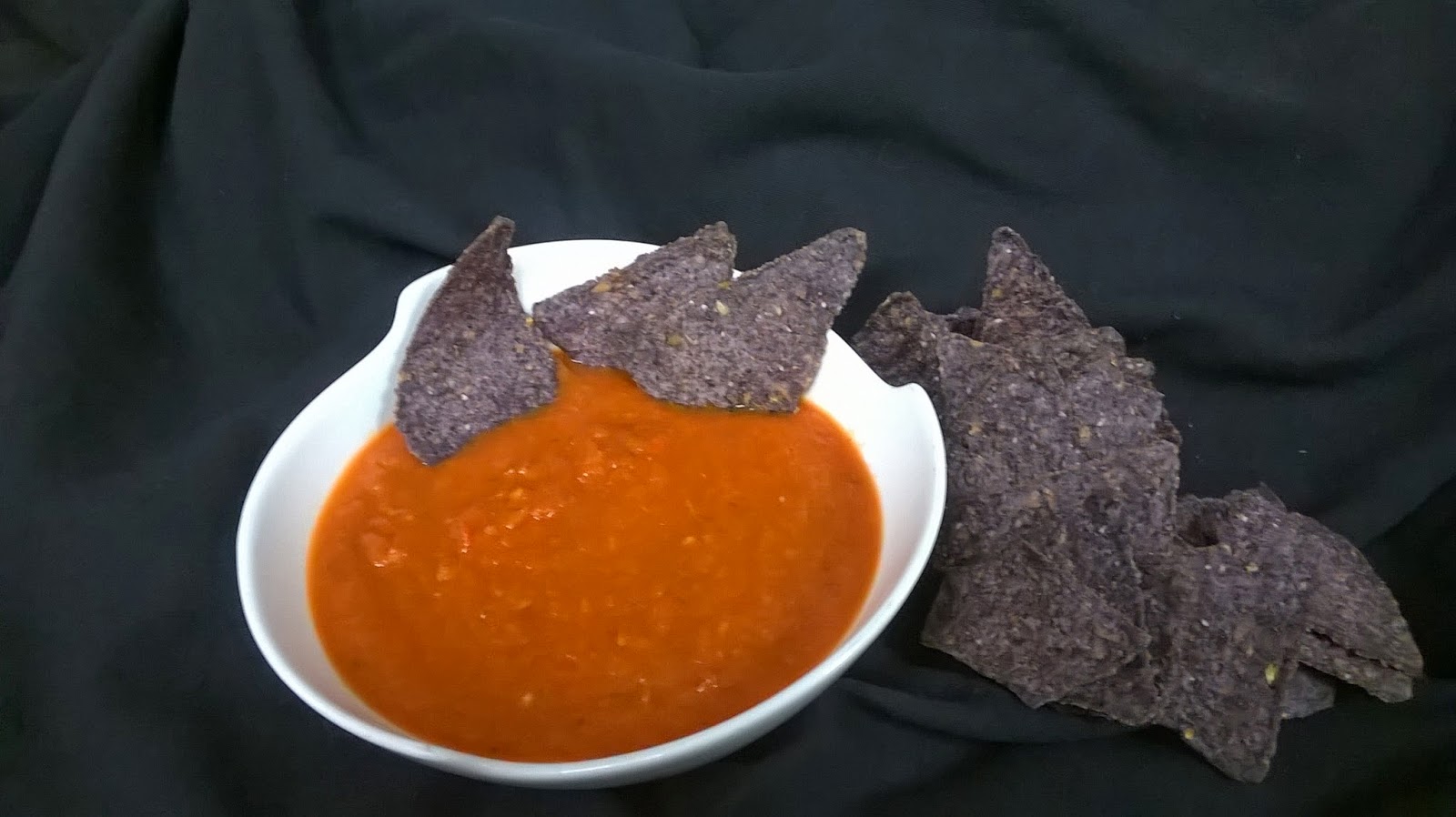 I have a bit of a treat for you today. My work place had a competition this week called a soup throw-down. To gear up for this, our bistro had a mini throw-down to pick a couple soups to enter. Out of the five soups offered by five different chefs, Chef Terri Bernstein and myself, were chosen to enter our soups into the throw-down where 11 different bistros would compete. I will be sharing the recipe for the soup I entered.

Also, just so I don't leave a cliffhanger, even though we entered great soups for our bistro, we did not place in the top three. Our Executive Chef did ask for us to keep the recipes on hand and make them as regular soups for our soup line. I am also hoping the Chef Terri will guest post her soup on here, but I still have to talk to her about that.

Here's a picture of our team before the presentations and tastings. 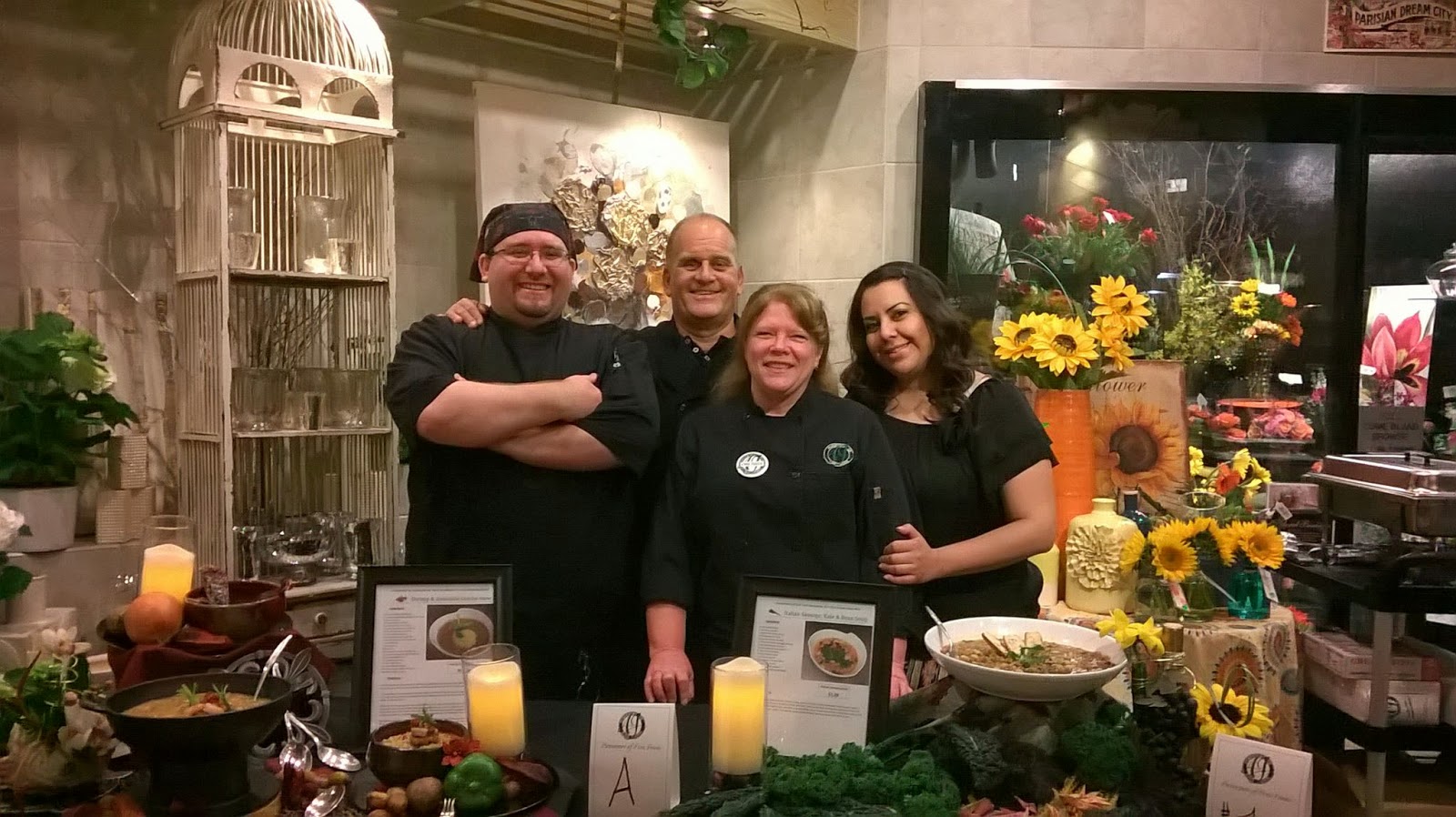 Here is the recipe and yes, this a Creole recipe, not a Cajun recipe, since it does use tomatoes. This recipe also yields a gallon or so of stew. 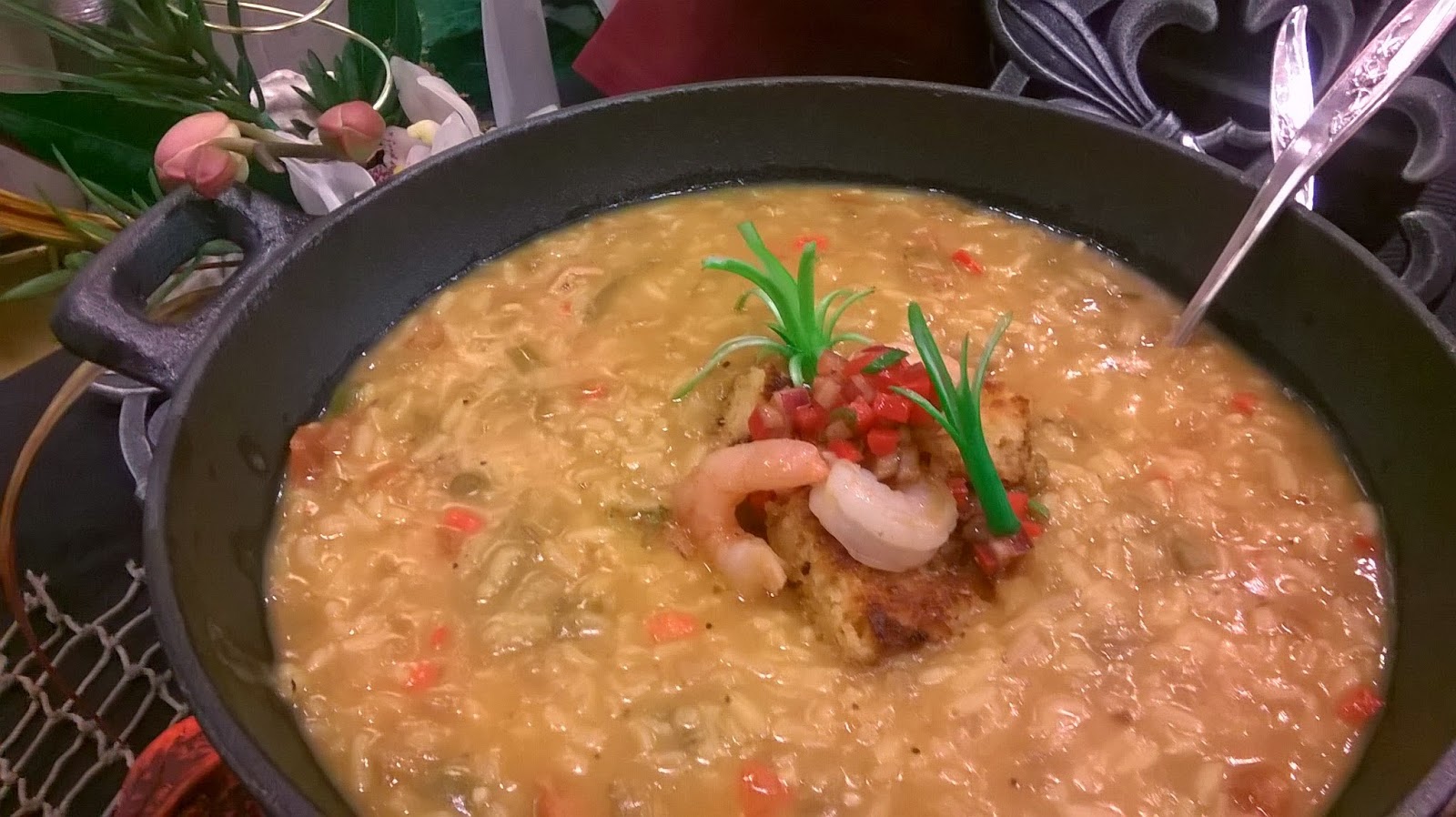 Take the Rice and 16 ounces of the Water, along with the Turmeric and a little Salt and Pepper, and place into a pot and cover. Place onto the stove top on medium heat and cook until al dente, about 20 minutes.

In sauté pan, melt 3 ounces of Butter and add the 2 ounces of flour as well as 1 teaspoon Cajun Seasoning, mix fully and toast over medium heat until the Roux becomes dark brown and smells like spicy peanut butter. Put aside until needed later.

While the rice is cooking,  in a sauce pan or a stock pot, melt 3 ounces of Butter and then add the Bacon and Andouille. Let the Bacon render while the Andouille browns, stirring frequently. Add the Shrimp, Garlic, Celery, Bell pepper and Onions, and sweat until opaque. Add the Sherry Vinegar to deglaze the pan, then add the Tomatoes and Okra. Let gently simmer until Okra is tender and the ingredients take on a starchy look.

Add the Bay Leaf, Gumbo Filé Powder and the last teaspoon of Cajun Seasoning, mix thoroughly. Add the Beef Base, the Worcestershire and the rest of the Water. Let simmer for 30 minutes. Add the Cajun Roux slowly until a nape coats the back of a spoon.  Add the Rice and make final adjustments to seasoning by adding Salt, Pepper and Cajun Seasoning to taste.

As a garnish topper, I made little square cornmeal fritters, topped with an andouille, bell pepper and onion salsa and a few shrimp that were marinaded in the salsa, as well as a couple green onion blossoms. 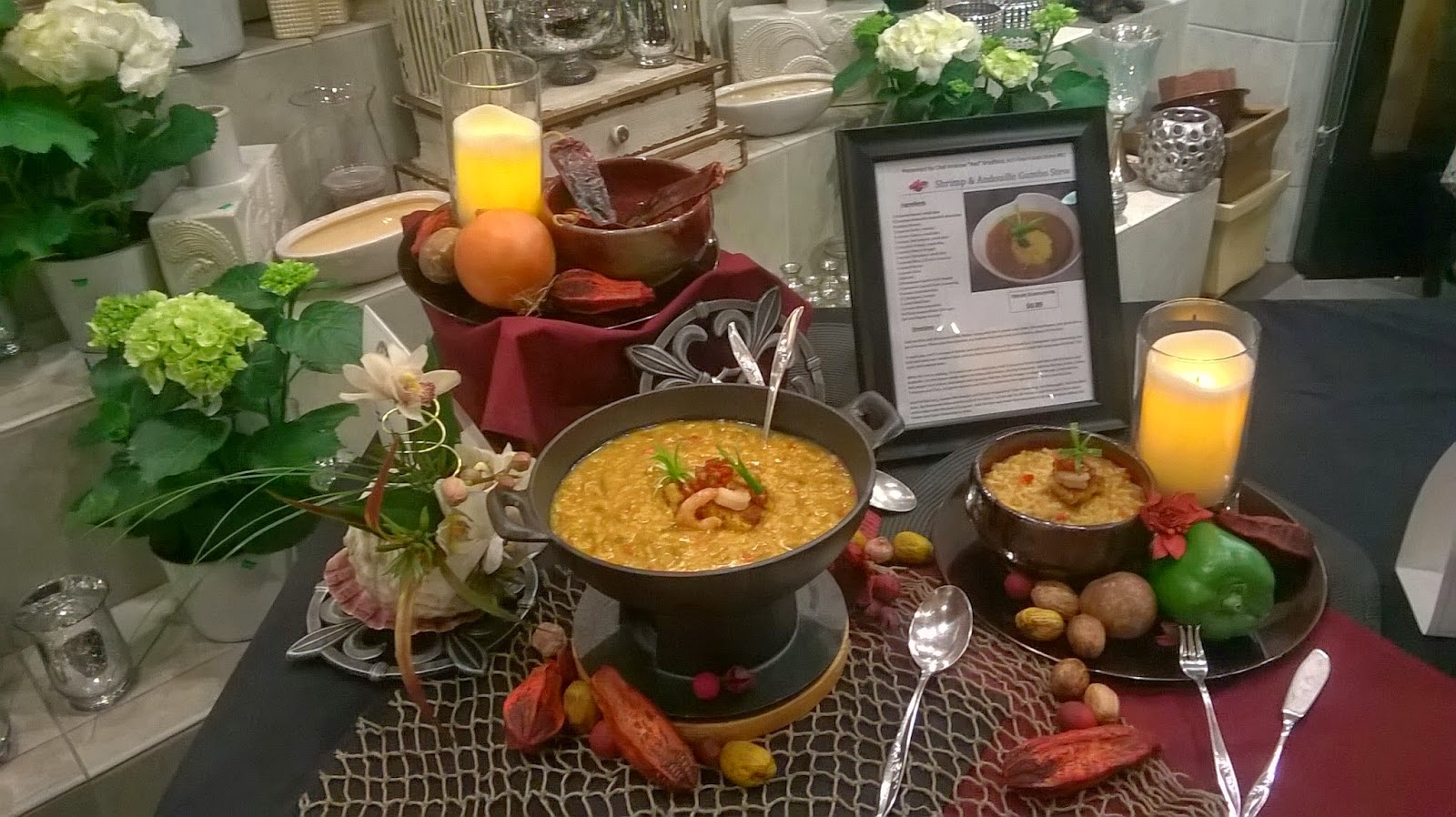 Here is a picture of how I set up my display table.

Here are a few fun facts that I found while researching this recipe.

The Cajun movement started in the 1700's as French settlers moved into Louisiana after being removed from the Acadia Region of Canada after a British conquest. At this point any person that immigrated into the Louisiana region was known as Cajun and any person born in the region was Creole, who were usually multiracial. Gumbo was popular from the very poor farmer/hunter all the way to the upper class officials, with each caste using very different ingredients. While the farmers could get access to rabbits, chicken and fish, the aristocrats had access to highly sought after exotic ingredients such as andouille sausage, Caribbean spices and Spanish saffron.

Also while Cajuns used an oil and flour based roux, Creole gumbos used a butter and flour roux. This dish also combines many cultures to make a great dish. Africa, Germany, Portugal, Spain, Caribbean isles, France and Native American, all influence this dish, whether by ingredient or technique.

Since a lot of immigrants seemed to be Catholics, Marde Gras was also started when people donning colorful masks and outfits went house to house or farm to farm, to ask and perform for ingredients for a collective gumbo pot, where at the end of the day everything would be tossed into the pot and turned into a gumbo. Fat Tuesday(Marde Gras) marked the beginning of Lent, when many Catholics would begin a fast at sundown, that would last until Good Friday.

While most would say that a gumbo goes over rice, it was documented in the 1800's that poor farmers were pouring gumbo over a cornmeal mush. Since grits and polenta are very popular in the South it should not come as any surprise.

Well, I hope you enjoyed this little journey to the deep South! Enjoy!
Posted by Chef Andrew Bradford at 4:25 PM 1 comment:

Today's recipe comes from one of my culinary classes and is something that I would have never caught myself eating. I walked into class that day thinking to myself that I did not want to eat liver, much less smell it. As I entered the classroom that day, I found a giant and I mean, GIANT, calf liver on the center work table, I was actually kind of amazed at how large a calf liver could be.

Before I start the recipe, it should be noted that if a fresh liver is acquired, there is a thin membrane over the entire liver that must be carefully removed before preparations begin. With that said let the second course commence.

Begin with making the sauce. Heat 2 tablespoons of the oil in a large skillet. Tear the white bread into small pieces and add to the skillet along with the almonds. Cook over low heat, stirring, until the bread becomes golden brown. Stir the crushed garlic and sweat until the garlic is very fragrant. Add a few strands of saffron as well as the sherry to the skillet and salt and pepper to taste. Bring to a boil and let simmer for 2 minutes, then remove from the heat and add the vegetable stock. At this point a blender or immersion blender comes in handy. You want to blend the sauce into a smooth mixture. A food processor would also work but the mixture will not be as smooth.

Once done, set the sauce aside and dice the liver into large bite size pieces. Dust lightly with flour that has been seasoned generously with pepper. Heat the remaining oil in a clean skillet, then add the liver and cook over medium heat, stirring constantly, until firm and lightly browned. At this point the liver should not be thoroughly cooked. Once browned, add the sauce over the liver and reheat gently. Once at desired temperature, place onto a communal dish, top with the fresh parsley and then serve it warm, with the crusty bread!

While I might not eat this a lot, I will eat it while at any Spanish restaurant that features it as an appetizer.

Here is a picture of my plates after all my work: 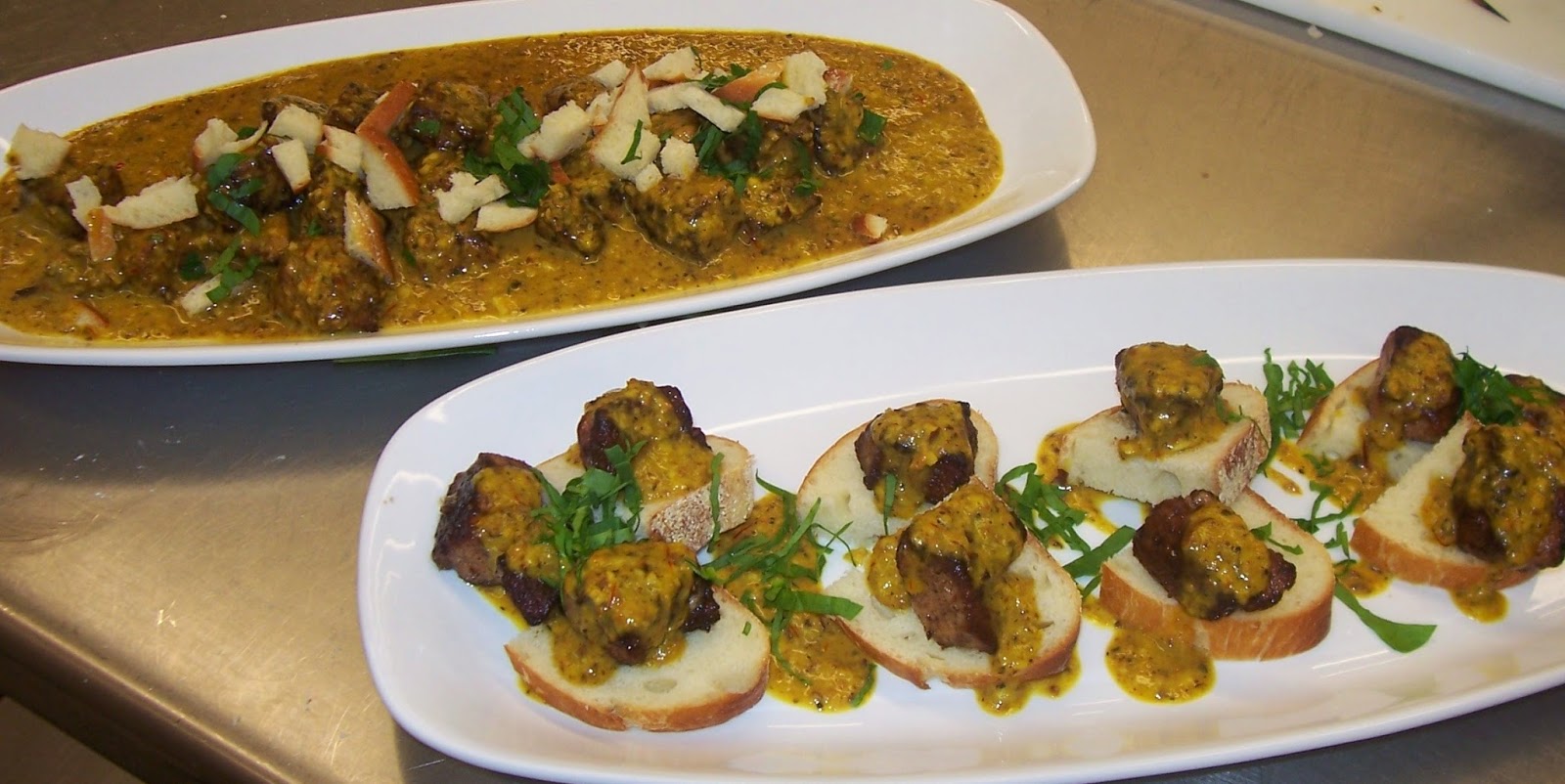 As you can see, the saffron brings out a lovely shade yellow as well as adding a unique flavor. I also plated an extra plate as an appetizer to get a different feel. Having liver prepared right is definitely a must if you do not like liver. The dynamic of the entire dish was well thought out and is a must taste even if you loathe liver.

Until next the next dish!

Posted by Chef Andrew Bradford at 6:38 PM No comments:

So it looks like I have about 20 blogs on draft that I never posted while going through culinary classes. I was so excited and thoroughly invested in my classes that I put this blog on the back burner. I honestly should not have done that but I have since finished and graduated and am now working as a Certified Gourmet Chef as well as running my own catering business. Now that everything has settled I will be revamping this blog. I plan on taking those 20 or so blogs, re-editing and posting them.

I am really excited to continue this blog. My time has leveled off and I will be cooking a lot more at home, practicing and polishing skills. My lovely wife has been eating my food and loving every minute of it...I think. (/snickers) Maybe I will also have her guest post once in a while.

Until next time, let your taste buds salivate!
Posted by Chef Andrew Bradford at 1:00 PM No comments:

This site will feature the best of the recipes and posts that I find or create. Keep reading for juicy, tender morsels of good food and drinks!

Chef Andrew Bradford
Starting out as a dishwasher in a restaurant at 15 and working in food and beverage industry for 7 years, I took a 6 year break as a Property Accounting Technician. After the stress of hating my job, I finally took the plunge into the culinary world to study and become an aspiring chef.